It is five years ago this month that BinaryNow officially launched its e-shop. Since our “birth” in 2009, we have come a long way from offering a single product line from our first vendor, through running a multi-vendor online store offering a various software titles, to developing software in-house per our customers demand and specification.  Our popularity has grown and our software is now sold over the Internet in 73 countries world-wide and in retail stores in USA. 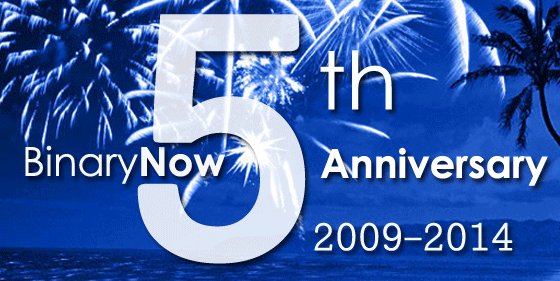 We are proud of these accomplishments:

We hope that you are as excited as we are about our accomplishments. It is easier than ever to connect with us on Twitter, Facebook, and LinkedIn or use our contact page.

“It feels pretty amazing that we have made it to the five year mark,” Premysl (founder, CEO) admits. “We are committed to bring more in-house developed products and also add support for mobile platforms. It’s a very exciting time. We got a lot to do.”

Our thanks go to our loyal customers, technology partners, publishers and employees for making the last five years so great. We look forward to many more.